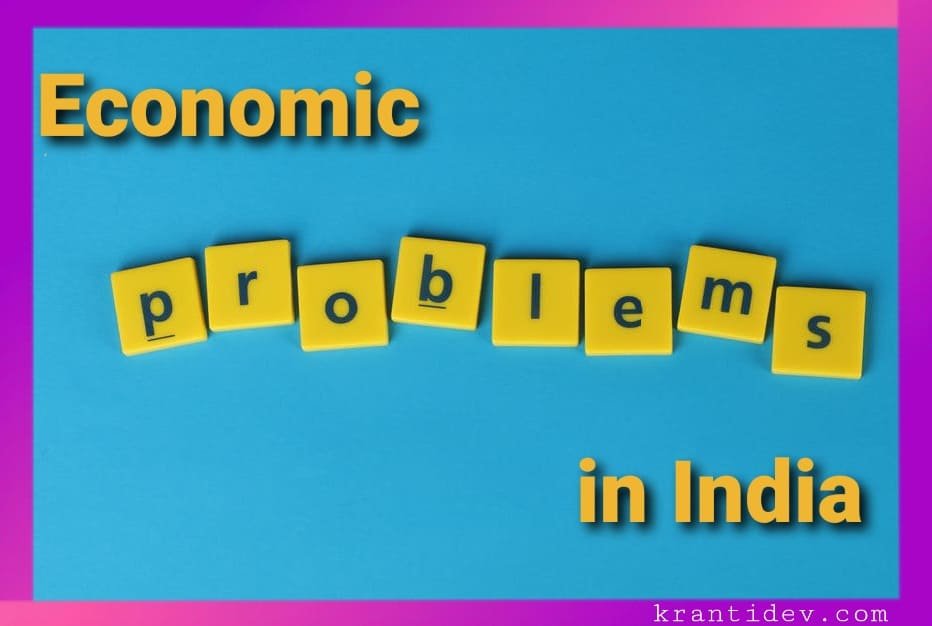 In this article, we will explain the economic problem in India. Every country faces this economic problem which is the problem of how to make the best usage of the limited and inadequate resources. The financial crisis does exist because people’s needs and want are endless. In contrast, the resources available to satisfy their needs and desires are limited.

In this article, you will learn about the main problems of an economy. Like other economies, India is a developing economy, faces the same issues. However, India receives honors for a sustained growth rate. In contrast, it is still a low-income developing economy.

Even today, nearly 25 percent population lives below the poverty line in India. Besides, many human and natural resources are under-utilized. However, since 1991, the Indian economy has followed free-market liberalization, greater trade openness, and improved infrastructure investment. As a result, it helped the Indian economy achieve fast economic growth and economic development rate.

The following points highlight the central economic problem in India.

Central problems of an economy:

These are the central problem of an economy.

Not only per capita income is lower, but there are significant inequalities in the distribution of income and wealth. The logical outcome of this imbalance is mass poverty. Nearly 60% of the total population share one-third of national income. At the same time, only the wealthy five percent enjoy the same income in India.

This imbalance enlarges the issue of deprivation. Even in 1972-73, more than 50% of the total population lived below the poverty line. However, thanks to some economic progress, it has come down from 36% in 1993-94 to about 27.5% in 2004- 05, poverty estimate based on Uniform Recall Period. In short, the Indian economy still staggers under the vicious circle of poverty.

The country has improved the primary education attendance rate and expanded literacy to roughly three-fourths of residents. India’s literacy rate had increased from 52.2% (1991) to 74.04% (2011). The right to education is one of the fundamental rights under the eighty-sixth Amendment of 2002.

In addition, the government passed legislation to provide free education to all children further. However, India’s literacy rate of (74%) is lower than the worldwide standard, and the country suffers from a high drop-out rate. Moreover, educational opportunities differ by region, gender, urban and rural areas, and among different social groups.

The country has a high percentage of English speakers. However, there are still high levels of illiteracy amongst the Indian people. It is more alarming in rural areas and amongst women because more than 50% of Indian women are illiterate. It limits economic development and a more skilled workforce.

Corruption has been a significant economic problem in India. A 2005 study by Transparency International uncovered that more than 50% of Indians had first-hand experience paying a bribe or using contacts to get a job done in a public office. A follow-up study in 2008 saw this rate to be 40%. In 2011, the ranking of India was 95th place amongst 183 nations in perceived levels of public sector corruption. However, by 2016, India saw a decline in corruption, and its ranking enhanced to 79th place.

The unemployment rate has been growing persistently since the days of economic reforms began. It rose from 1.96% in 1993-94 to 2.39% in 2004 and 05. However, 2.89% employment-growth in 2004- 05 compared to 0.98% in 1999-2000 is encouraging. But employment rise in recent decades is not proportional with the labor force growth rate. What we experience now is ‘jobless growth.’ The huge unemployed workforce is another factor contributing to India’s economic issues.

As a result, the official unemployment rate in 2017 was just below 5%. In addition, the Organisation for Economic Co-operation and Development report uncovered that over 30% of people aged 15-29 in India are not in a job, training, or education. In LDCs, natural resources are under-utilized, and a massive wastage occurs in the case of human resources. Moreover, the slow economic growth rate and rapid growth of the population have emphasized the problem of unemployment.

Labor is abundant in our country, making it challenging to provide gainful employment to the entire population. Besides, the capital deficiency has led to the inadequate growth of secondary and tertiary occupations. As a result, it has bestowed immovable unemployment and under-employment in India. Moreover, with about half of the working population engaged in agriculture, the marginal product of an agricultural laborer has become negligible.

Moreover, the problem of the increasing number of educated unemployed has added to the woes of the country too. The tardily unemployment figures, released by the Centre for Monitoring Indian Economy, are proof of this economic atony. The CMIE data show that about five million or 50 lakh salaried jobs were lost in July, with total layoffs in the formal sector to over 1.8 crores.

We can understand The economic growth of any country from its level of national income and per capita income because the higher the level of national income, the higher the economic growth rate. But, the population during the time stood at 1124 million. It means that per capita (NNP) reached Rs 24,256 yearly or Rs 2,021/month. So, the standards of living of people are miserably low.

Even the necessities are beyond the means of the majority of the population. Besides, according to India’s per capita income, India is among the world’s poorest countries. In 2014, The per capita income in India was $1,560. In the same year, the USA’s per-capita GNI was 35 times that of India, and that of China was five times higher than India. Besides, India also has an issue of unequal distribution of income. So, the deprivation problem is a significant hindrance to the nation’s economic growth.

With the unshackle growth of demand, this seems to be the biggest challenge for the economy at the current moment. Over months, demand for imported goods and commodities like fuel, food, consumer goods, and power has fallen. Moreover, while India’s market despairs began in the year 2019, the outbreak of coronavirus aggravated the scenario. As a result, consumer demand is declining due to the significant job losses in the wake of this raging pandemic which has forced closures of businesses.

Another reason for the mustiness of the Indian economy is the distribution of employment in the country. Less developed countries live primarily upon agriculture and extractive industries, like mining, fisheries, and forests. According to the World Bank, in 2014, about 47 percent of the working population in India was engaged in agriculture. Unfortunately, it contributed 17.4% percent to the national income meaning a low productivity per person in the sector. Unfortunately, this is the most inefficient financial sector, and reform has proved slow. The development of industries failed to attract enough workforce either. In 1950- 51, over 55% of our GDP came from agriculture, but In 2007-08, its contribution toward GDP came down to 19.4%. In India, 52% of the total population was engaged in agriculture in 2004-05. However, though agriculture occupies a chief position in India, it is still backward.

Another factor that contributes to the economic issues in India is population. Today, India is the second most populated country globally, the first being China. As a result, we have a high level of birth rates and a falling level of death rates. To support the massive population, the administration needs to take care of the basic food, clothing, house. Hence, there is a raised economic burden on the government.

2) How many companies in Nasdaq.

3) Types of bank accounts in India.